Dede Bandaid, Israeli graffiti designer and street artist from Tel Aviv, came to Neuruppin late in November, invited by the Brandenburg Medical School (MHB) to decorate various free walls and other surfaces on campus and in Neuruppin. Not least his designs for plaster strips have made him famous worldwide.

MHB head of communications Dr. Eric Hoffmann contacted Dede in February and suggested a joint project with the Brandenburg Medical School: “Strips of plaster serve and help to heal injuries and close wounds and may be seen as symbols of medical care in general – thus of the MHB as well. The MHB was after all founded to heal and close an open wound in Brandenburg – the shortage of physicians and psychotherapists. This is why Dede’s artistic bandaid designs fit in well with the MHB. Dede was excited about the idea of collaborating with a medical school right from the start. His planned visit to Neuruppin had to be postponed repeatedly, due to the Corona pandemic. But following a stay in Prague in November, Dede finally came to Neuruppin for close to one week.

“What we also like about his works, apart from the iconic bandaids, is that he frequently includes site-specific elements as clear references to their place of origin. This applies to his many variants of bandaids and plaster strips and also to the wild animals Dede often depicts in his designs. It is birds as a rule, but in the case of Neuruppin Dede opted for wolves in allusion to the fact the Brandenburg has more packs of wolves than any other part of Germany. He selected red and grey for his colour scheme in adherence to the corporate design of the MHB.” 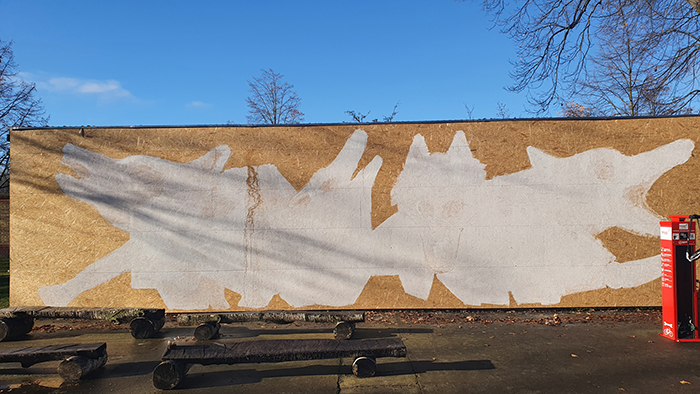 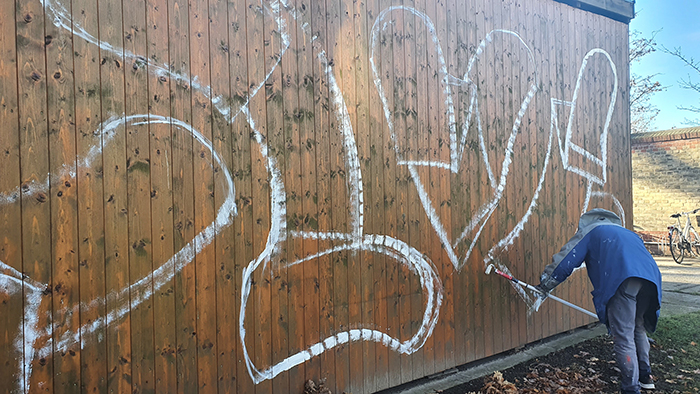 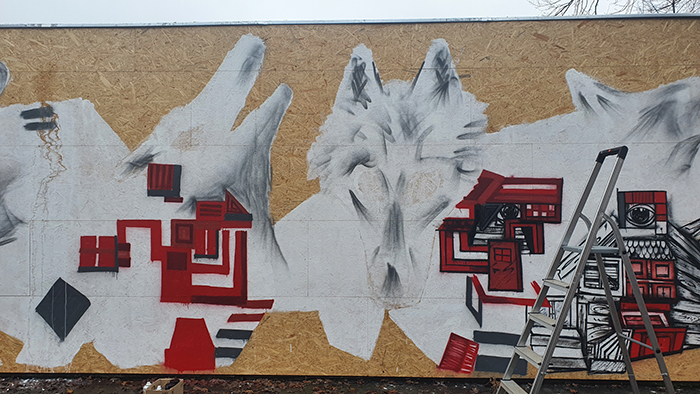 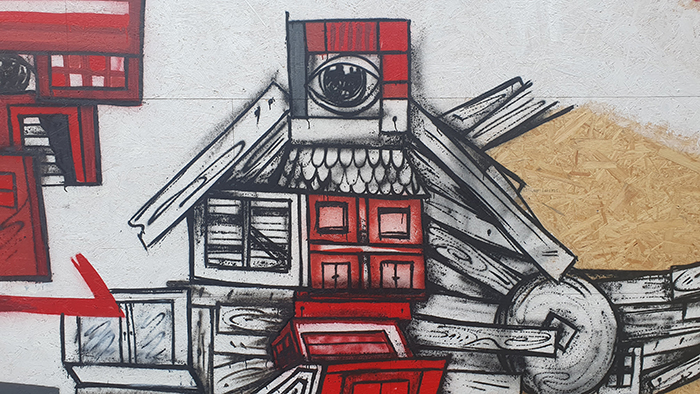 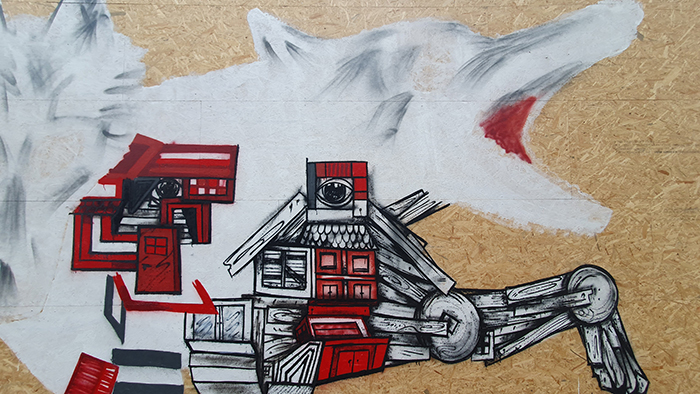 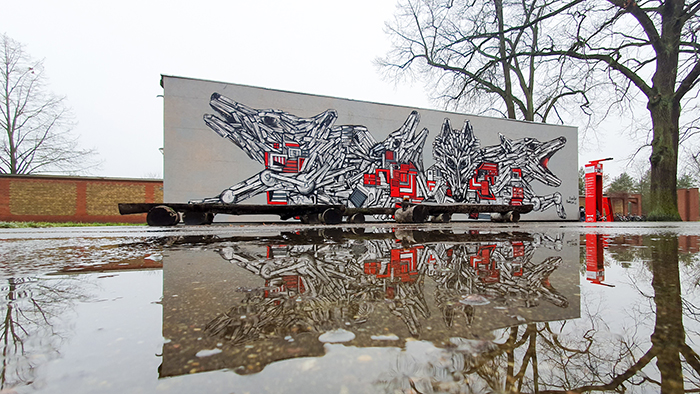 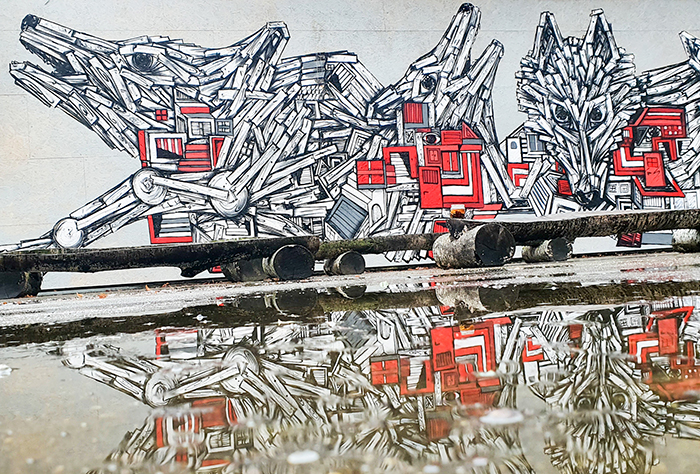 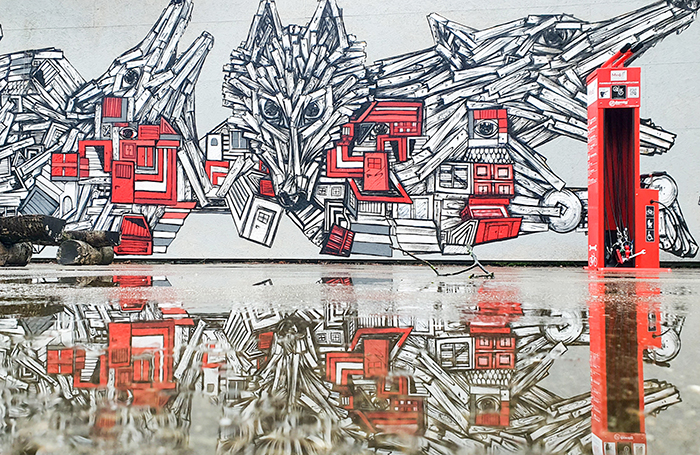 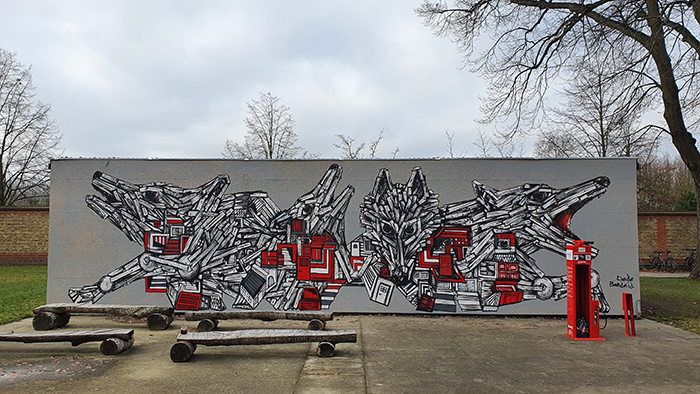 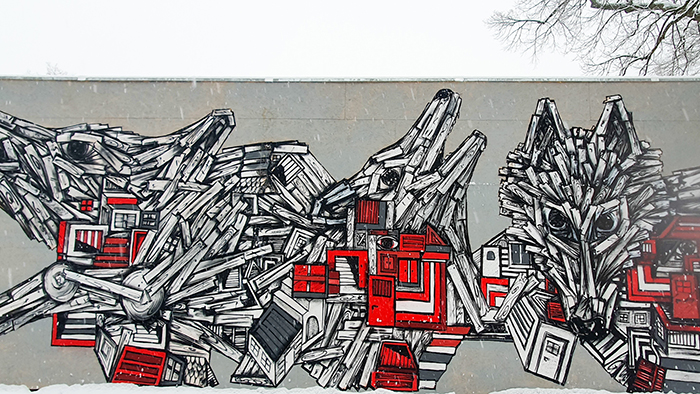 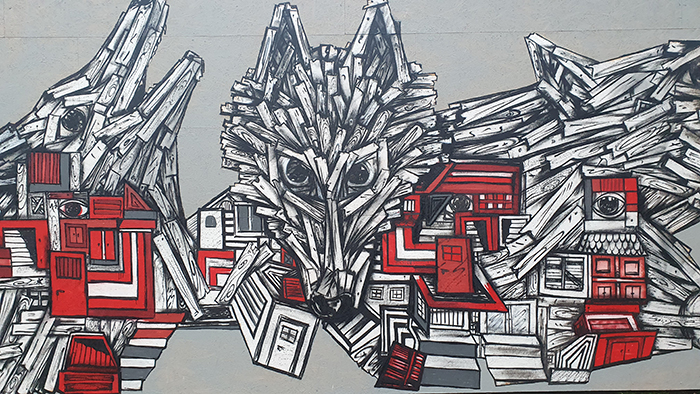 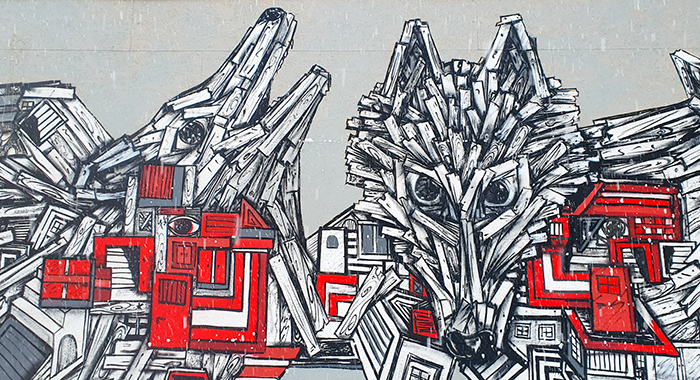 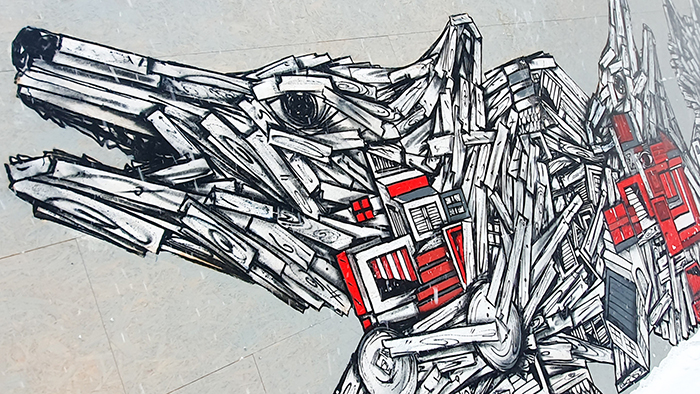 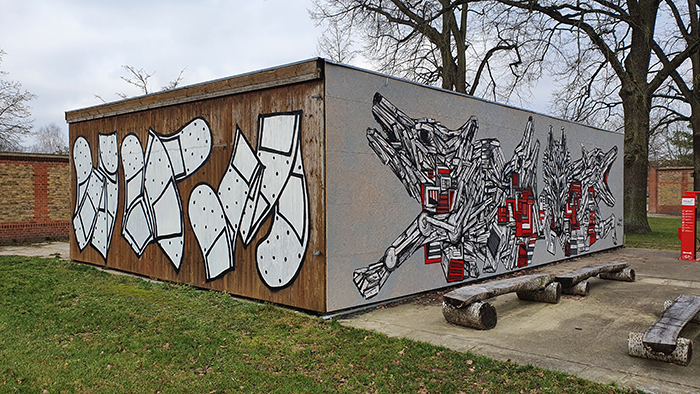 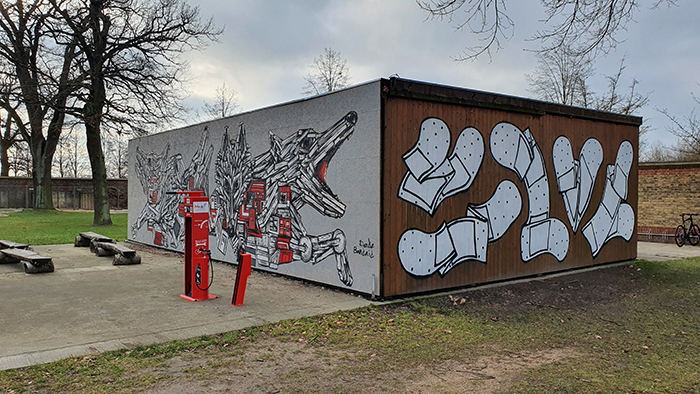 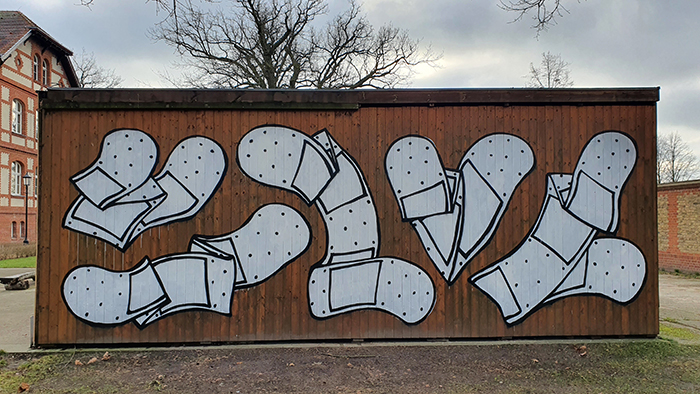 Hoffmann is pleased to note the widespread approval and support for this project. The local clinic group assumed part of the costs for material and Dede enjoyed free accommodation and meals on the hospital grounds. Further support came from the association of MHB supporters, whose chairman Prof. Günter Fleischer welcomed this additional opportunity to draw public attention to the MHB by way of visual art. Three bus shelters in the vicinity of the cultural centre Kulturkirche Neuruppin were released for the street art project, and also parts of a wall near the townhall. 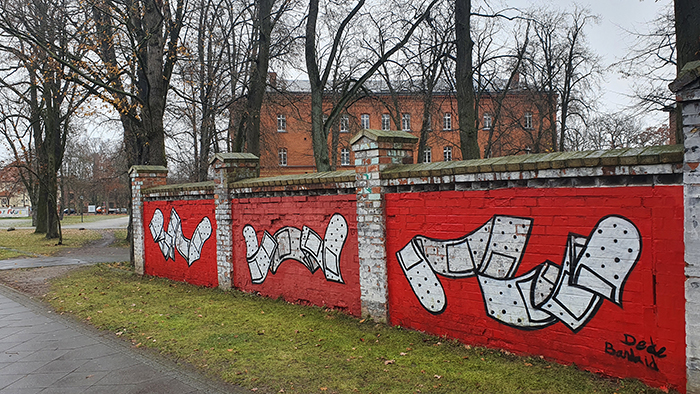 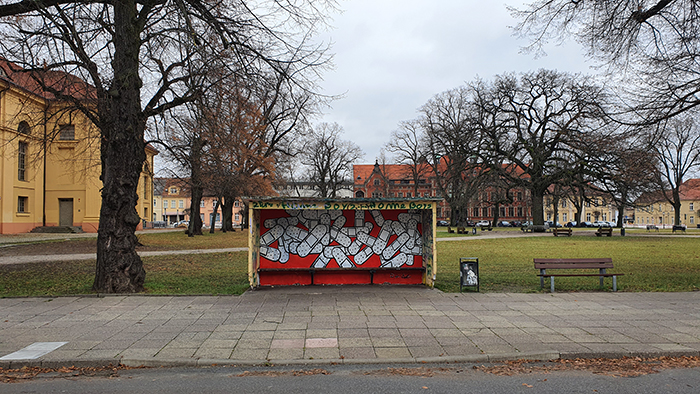 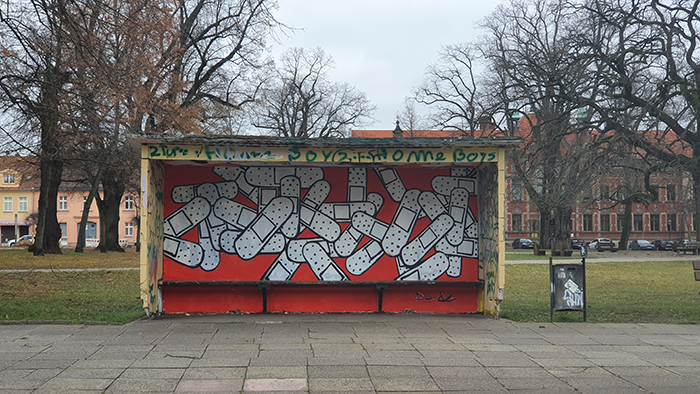 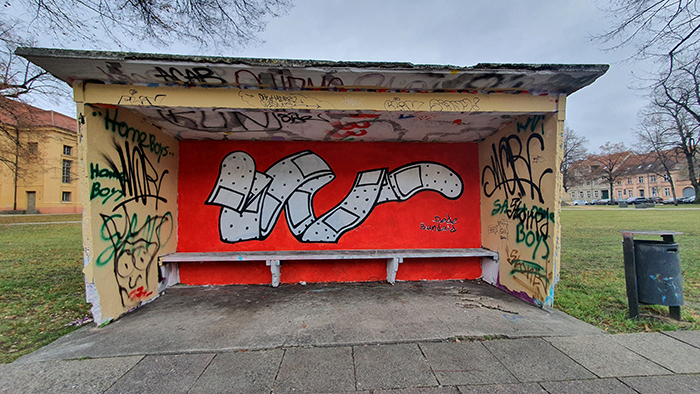 Dede (to quote from his homepage, see below) is a Tel-Aviv based, urban narrative artist, who utilizes various mediums to communicate within the public arena. He started creating his works after finishing his military service, and continued to develop and elaborate them while completing his undergraduate studies at Bezalel Academy of Art and Design. Nowadays his works can be viewed at galleries, exhibition spaces, various art events and in the streets of art capitals around the world, such as London, New York, Berlin and Tel-Aviv.

And since end of November 2021 in Neuruppin, too.